Nandi Senator, Samson Cherargei, is on the receiving end after he was exposed by a lady from Catholic University of East Africa (CUEA), Karen campus.

In WhatsApp chats shared by a Facebook user identified as Koech, Cherargei, who is a close ally of Deputy President William Ruto, was desperately begging for sex from a lady identified as Cate.

In the screen shot the Jubilee the Senator was begging to meet the lady for supper and the lady acknowledges that she is his staunch supporter.

In the chats, Cate tells the senator that she cannot give in as he (Cherargei) is also seeing one of her friends who is a student in one of the local universities.

“He is now becoming a bedroom bully by slowly snatching his own FB followers, my friend Cate is now a victim of circumstances,” said Koech.

The screenshots have widely been shared on Facebook and different platforms in Nandi County as the senator remains silent.

Here is one of the screenshot 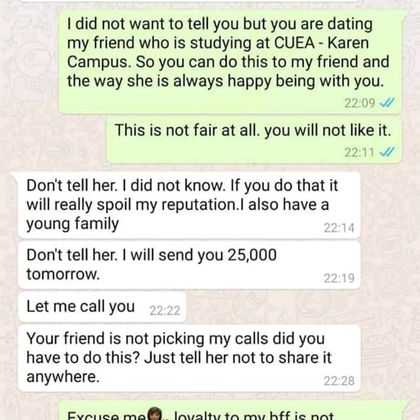 Sexy Kenyan LADY goes live and makes love with her ancestor Mzungu husband, this is a dinosaur

Oliver Mathenge: I’d drink a bottle of whisky alone in one sitting

Woman sues ex after his abnormally long member stretched her

Sorry. No data so far.

Politics Kenya Daily News - June 10, 2019
0
An MCA from Machakos has slammed a faction of Jubilee politicians for coming up with the team Kieleweke. George King’ori of Muthwani ward in Mavoko...

ABOUT US
Kenya Daily News is your news, entertainment, music fashion website. We provide you with the latest breaking news and videos straight from the entertainment industry.
Contact us: info@kenyadailynews.com
FOLLOW US
© Kenya Daily News | All Rights Reserved | Designed by: Tamiaweb.com
MORE STORIES